We activated GB1WW in May over the weekend of 12th – 13th for Mills on the Air. 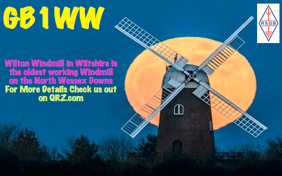 This is Wilton Windmill with the Supermoon behind it from 2018 with our special event callsign added to be used as a QSL card.

The day started rather early on Saturday morning with the usual group volunteers putting up masts for the antenna, event shelter, and gazebo to house operating equipment and operators. The gazebo was used as a mess tent and second operating shelter. We started radio operations around 09:15 – 09:30 and continued all day, with our main operator taking breaks at various intervals. The stations heard and contacted were from Europe mainly to begin with, and working inter UK was changeable with Scotland, Northern Ireland being amongst our easier contacts. 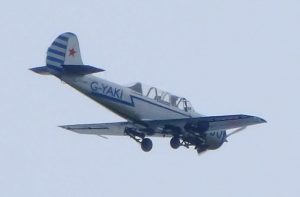 We had a fair amount of visitors from several of the amateur radio clubs from around the area. Some even got into the spirit and operated for a while, for which I give them a big thank you and will list them at the end of this article. Around lunch time we had our flyover by the Yak-52 which is an ex-Russian trainer aeroplane and is owned by Dom 2E0WHQ. He said that he wanted to fly over the mill on his flight from Popham to Wales where he was taking the aircraft, to have its yearly airworthiness certificate inspection. One of our SDARC club members (Jonathan M0ZGB) took a wonderful closeup shot of this aircraft as he circled around and gave us a wing wave before continuing his journey.

The first day of the event was very successful in proving all our hard work building and testing the antenna setup prior to using on the day was correct as it performed extremely well. We had a visit from Ian G0GRI from the Trowbridge amateur radio club with his portable 2Mtr setup which proved a useful addition to our overall tally of stations contacted. We had Phil M0PBZ from SDARC setup an 80Mtr station and he made contacts on CW & SSB using a couple of different antennas built by himself that worked very well. We had M1CJE bring along his portable data station and was successful in achieving a fair few contacts on FT8 but got a lot of reports that he could be heard over a good part of the globe. The first day’s operating ended around 17:30 as we had to pack equipment back into our vehicle’s as it wasn’t safe to leave them overnight.

The Sunday started a little early but not as early as the previous day, and the first thing to get up and running was, of course, the kettle and a cup of tea. We had our share of visitors during the day and we had another visit from a Newbury club member Norman M0JEC with the intention of videoing the mill. We operated for most of the day and our tally of contacts for the weekend was 225 so well done everybody who was involved with this special event station. We’ve received 44 eQSL cards from our contacts at the time of this article going to press.

We’ve contacted enough UK MOTA stations to apply for the certificate from Denby Dale club to confirm that we have activated the station.

Let me say a big thanks to all the helpers involved with putting things up and operating plus all the other bits and pieces: – John G1OQV, Neil M6CUE, Bill M0TDW, Phil M0PBZ, Russell M0RFI, Mike M5CBS, Andrew M1CJE, Dom 2E0WHQ & of course his flyover.
Thanks to the visitors Roy G0VFS, Ian G0GRI who operated on 2Mtrs, Phill G6EES who operated for a while, Roy G4VWG, Jonathan M0ZGB, Matt 2E0WLF for his excellent drone footage of the event, and several others who visited. 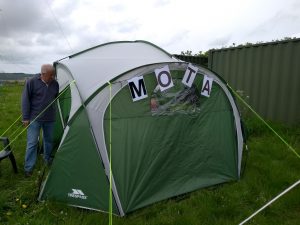 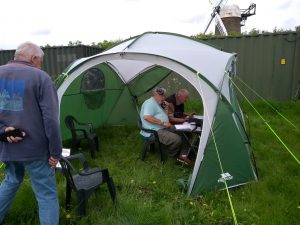 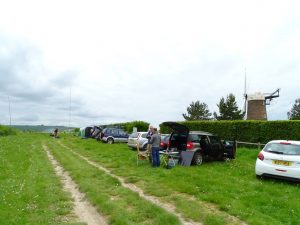 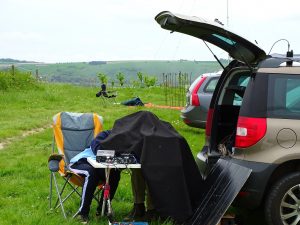 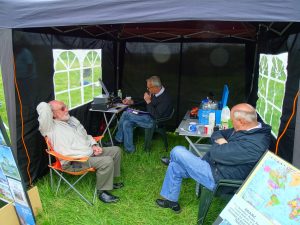