You are here: Home / All posts tagged balloon
03

Around the world 28 MHz CW balloon

Bob Bruninga WB4APR brings news of an around the world balloon attempt on March 5/9 that’ll carry a CW transmitter on 28.223 MHz.

It will be launched on either 5 or 9 March 2012 in Annapolis Maryland and go East towards Europe.

The balloon payload will only weigh about 50 grams. About the mass of two standard 9v batteries. It will use about 10 Mylar Party balloons to achieve constant-pressure flight level above 40,000 feet. The Telemetry will be in CW on 28.223 MHz and will contain only Battery voltage, and inside and outside temperatures.

. . . W3ADO I nn T nn APRS.ORG . . . < == inside temp positive and outside negative . . . W3ADO IN nn T X APRS.ORG . . . <== inside temp negative and outside positive The CW message will be repeated once a minute or so. The WEB page may be only send on every other beacon. TRACKING: The balloon has no GPS. All tracking will be done by HF DFing. All APRS users are assumed to know how to enter an APRS DF bearing report so that their DF bearing line shows up on global APRS maps. Check the APRS site for latest information at the http://www.aprs.org website. 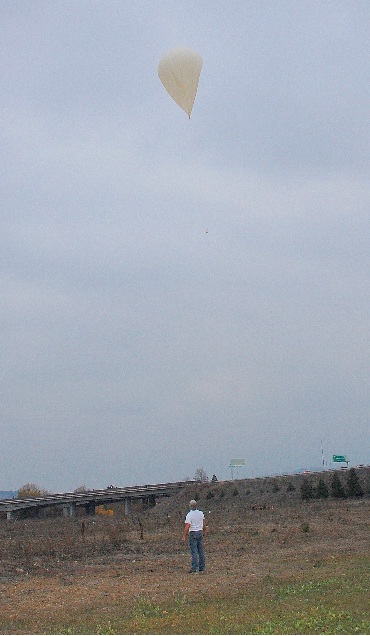 Ron Meadows, K6RPT, and his son Lee — leaders of the California Near Space Project — successfully launched an Amateur Radio high altitude balloon on Sunday, December 11 at 4:43 PM PST. The balloon reached a cruise altitude between 105,000 and 115,000 feet, where it continued its travel across the United States, the Atlantic Ocean and Spain and into the Mediterranean Sea. For most of its trip, the balloon traveled at about 150 miles per hour and eventually covered 6236 great circle miles in just 57 hours 2 minutes. According to the CNSP, this is a new Amateur Radio balloon flight record for both distance and duration.

The balloon, which bore the call sign K6RPT-11 and could be tracked via APRS, traveled through California, Nevada, Utah, Colorado, Kansas, Missouri, Illinois, Indiana, Ohio, Pennsylvania, Maryland, Delaware and New Jersey. “When the balloon left the New Jersey shore behind, it was received by coastal stations as far away as Nova Scotia,” explained CNSP Team Member Don Ferguson, KD6IRE. “When it exceeded the range of these stations, we lost track of it and feared that we would not hear from the balloon again.”

Ferguson told the ARRL that when they woke up the next morning, the CNSP Team learned that K6RPT-11 was still in the air and transmitting. CU2ARA — the club station of the Amateur Radio Association of the Azores, located on the island of St Miguel — reported that they had successfully copied K6RPT-11’s signal. That morning, the balloon reached a height of 111,503 feet and was traveling in excess of 160 miles per hour, headed east at 92 degrees. “The rest of the day on Tuesday was exciting, as more stations around the world took note of the little balloon form Silicon Valley that was heading for the European mainland,” Ferguson said.

“The APRS system of digital radio repeaters maintained reception of the data traffic from the balloon transmitter, which transmitted its location from the onboard GPS,” Ferguson noted. “In the US, this network is established on 144.39 MHz, but is on a different frequency in Europe. Radio amateurs across the world were able to quickly adjust the European receivers to the balloon’s frequency and provided continued tracking worldwide. This is yet another example of the response and flexibility of ham radio operators to meet a sudden challenge and provide communications when needed.”

According to the CNSP’s Twitter feed, the balloon burst on Wednesday, December 14 at 0946 UTC, off the coast of Algeria.