Despite the rather gloomy and threatening skies, some 12 club members attended the final activity evening at Barbury Castle last Thursday. There was some concern that storms over Northern France which were heading northwards earlier in the day might mean we would have to abandon the event. Not so. There were no thunderstorms on the weather radar and we enjoyed a pleasant, comfortably warm evening, freshened by a light breeze. Eight stations were active whilst another five members were helping and enjoying the evening of radio fun.

Once again, Ed M0OSM arrived early to try and catch some DX using his FT857 and 20M portable Rotary Dipole set-up. Alas, although stations could be received quite well, Ed struggled with poor propagation and only managed log a few QSOs.

Phil M0PBZ, used his FT897D rig with a 40m inverted-V dipole supported by a rather well-used fibre glass pole – well, to start with. Shortly after Phil put out a few CW CQ calls, we heard a loud crunch!! The thin top section of the fibre glass pole snapped at the joint leaving a rather saggy antenna. Phil quickly went to his aerial bag and used a much stronger solid fibre glass sectional pole set more suitable for supporting heavier wire antennas. Phil went on to work stations in Germany, Italy and Spain. Unusually, Phil also brought a short 2m/70cm mobile antenna so he could legitimately work James M1DST for the club Worked-All-Members competition. Last week’s 40m QSO was invalid as the only the 6m, 4m 2m and 70cm bands must be used.

James, M1DST brought along the multiband portable dipole supported on a proper 33 foot fibre glass pole. The antenna was set-up for 80m, allowing James to participate in the 80M Sprint competition. Using the Elecraft KX3 – with Win-Test logging program – James and Andy G0UWS worked some 21 stations by the time that darkness fell.

Also on HF was Phill M6FVJ, with his long wire antenna hidden in the trees.

It was good to see VHF in use this week. Tony G4LDL spent much of the evening programming his rigs for RAYNET work whilst Tim M6XTB, used worked several local stations through the local repeater using 2M FM and DMR.

Also on the 2m band was Jonathan, M0ZGB, who moved to Barbury Castle’s hill fort area to gain a little more height. Jonathan used his homebrew, frame-mounted FT817nd with 2/70 dual band whip and a Halo antennas. Despite trying SSB without success, the FM section of 2m was actually crowded allowing Jonathan to work Andover, Winchester and Oxford with just 5 Watts.

So what could have been a wash out, turned out to be a great night of activity to end to this year’s Barbury gatherings. It was also good to see newer licensees joining in, too. We were lucky with weather and lucky with conditions with some good DX along the way.

Videos of week 4 will published in the forthcoming weeks.

We return to Pine Trees from Thursday. 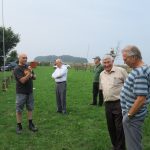 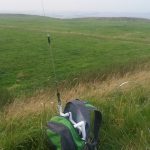 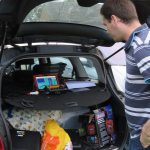